So on went the Brooks saddle leaving the Giant looking a bit sheepish with its new finery : Axiom rack and bar ends to boot. But no crud catcher on the back: won’t fit with the rack any which way I tried it. So how to stop a damp bum as the Ortliebs leave a gap up the middle? Roll up stuff in a waterproof bag and bungee it on I guess. Front crud catcher and milk bottle junk modelled extra fender will suffice up front http://singletrackworld.com/forum/topic/amazing-i-want-one-diy-front-fender

..and the Ortlieb barbag soon to be fitted (securely at last) with my new Klickfix adapter. The old wire cats’ cradle from Ortlieb was hopeless and bag droop  was inevitable..

This fitted like a dream and with the optional extender lets me fit lights that don’t hide behind the bar bag (Ah! Sadly this proved wrong and am looking for a longer extender that means light not hiding behind top of bar bag!) and my iPhone in TorTec case (again proved not quite enough room : unless you leave bar bag at home which rather defeats object.) Road trials ( see prev post ) went well and lead me up to dress rehearsal level try-out today with Ortlieb rolltops – no,’ iPad, not rollmops, that’s herring- ( loaded up of course) . 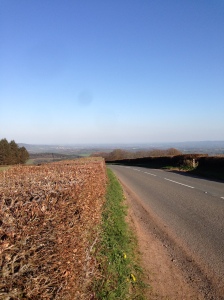 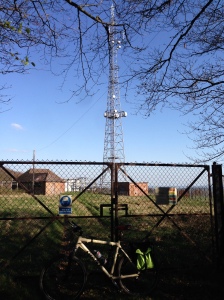 Saturday and yesterday were crystal clear easterly kind of days with a chilly wind out to get you, yet warm as summer in sheltered spots. Azure sky with no cloud. Both offered chances for rides to start emulating my hilliest riding days across Wales in just over 2 weeks time. So I managed two 30 mile rides up onto Exmoor with 2100 and 2500 feet climbing. both were great experiences, with brilliant views, not many cars and feeling pretty good most of the time. I’ve been working on my use of the Garmin 800 which I failed spectacularly with on my trip across to Amsterdam in 2013. Now I’m saving activities onto my SD card, and have just followed a great post  http://www.forgot.co.uk/garmin-edge-navigation/edge-800/ to set up a new 16 GB microSD card (for the price of 2 pints!)  with downloaded OpenStreetMaps of UK. These downloaded pretty well even with my rubbish broadband and transferred across onto the Garmin and worked straight off – easy peasy! No risk of a ‘seized Garmin’ as occurred somewhere near Luton airport in 2013! But I have the back up of ride with GPS on my iPhone if this fails, and a set of paper maps for most of my route from good old Sustrans.

No I will not enter the hot debate on “why blog?”. I think I know where I stand on this!  More clearly than where I stand in 3 weeks’ time with the little pencil on a string in my hand, I hasten to add. No thanks to David Dimbleby tonight who let things slip a little, I fear. No I’m just wrestling with the “How to” which provokes images of a learning curve of the slippery kind on the end of elastic (It’s a Knockout..). 2 steps forward and maybe 3 back. I hope that readers can see and comment on my posts and have linked to Twitter just in case that’s the only ear listening. Settings may have defeated me  …..! Delighted to receive feedback. The experiment continues……..

Today the Giant hardtail went to the bicycle hospital for a checkup and I got my old Raleigh back. I had a day off, the sun shone and so out I went for a run. Me and my old friend go back a long way: 25 years is a conservative option. I used to run this bike up and down the farmy lanes to work and didn’t give it the TLC it deserved- until this month when it (she?) had a makeover. Her (!) frame is kingfisher blue and somehow the paint job has survived, preserved under a crust of unmentionable bovine road dressing. The classic yellow walled tyres have been replaced with Schwalbe Road Cruisers (cool!) and many worn bearings have been replaced with glittering spheres. (in my fevered imagination.)  Some lovely new Raleigh classic mudguards and a sturdy rack complete the picture .. See below. The bit I’m not quite sure about is actually the focus of this post, namely the brown leather saddle. I got this Brooks B17 online from a German website: sound odd? Somehow they sell the same British saddle significantly more cheaply than their British competitors. I thought long and hard before taking the plunge with a Brooks. Marmite might be a reasonable analogy if one listens to the doubters vs. the disciples online. Anyway I bought it and put it on the Raleigh on the turbo trainer over the icy weeks in early January: and was instantly converted! I have a Selle Italia blade on my road bike and various spongy rubber things on other bikes : except the Giant. This has a Giant narrow contoured saddle which is comfortable enough. But I need to make the right choice for the Lon Las run. It’s hilly and rough surfaces are going to be the rule as so much is on forest tracks and other Sustrans fare. If today’s 40 miles are anything to go by I’d fit the Brooks. It was lovely and I doubt, tempting fate, I’ll get a kickback tomorrow. But that was on pretty much smooth Tarmac throughout. Nothing for it but in true scientific fashion I’ll need to do a better experiment. Tomorrow the Brooks is going onto the Giant and next ride needs a good dollop of forest tracks to give it and my backside a better simulation of what they can expect up in Wales. Watch this space.

Needing to get some hills into my legs I rashly attempted a loop spotted on ridewithGPS : Croydon Hill on the edge of Exmoor http://ridewithgps.com/trips/1957646. Bar ends and city tyres fitted on the MTB came into their own. But a short cut was needed with an hour under my belt and a deadline to wave my daughter off for Uni beckoning. The shortcut proved to be 1000ft climbing in just a few miles: a killer! Still I totted (not tottered thank you iPhone) up 2500 feet climbing in 32 miles and feel a little better about my 1st and 2nd Lon las days which are looking more than a little challenging. Day 1 is 60 miles with about 5000 ft climbing. I will post on the route plans shortly.

And now to get this bike sorted.

Happily today is my birthday and look what I got!

A cheque from a cherished relative and some bar ends.

First a little tale of travels from years gone by.

In 2012 I rode from London to Paris on a road bike. The route was a mixture of Sustrans in England and Routes vertes in France. The bike is a carbon racer, light as a feather, but skinny road tyres and an equally skinny saddle coupled with Sustrans surfaces made the English leg a bruising experience. At least the drops  spared my wrists the fate met by my coccyx.

In 2013 I struck out in a more eccentric direction and cycled from Blue Anchor in Somerset to Harwich in Essex, then on to Amsterdam from the Hook of Holland. This was a much longer odyssey, totting up 500 miles on the road by the time I got home. There were some train sections on the way back so I decided the folding Dahon 26″ was the steed of choice. Modifications included fat tyres and a slimline rack (maybe more on this anon) but straight bars proved my nemesis (or one of them). There are only 2 positions for the hands on these bars, the proper grip and the not safe “round the ends of the bars” version. So wrists were sore. The sorest part in a fierce competition for sorest.

And so bar ends.

Lets get get them fitted and get out on the road for some trials.

I may be looking for inspiration as the first day of my ride across Wales draws near: I hope to look no further than the efforts of Alex Dowsett: he is attempting to break the world hour record at Manchester velodrome only a few days before I start (May 2nd 2015). Manchester is where Chris Boardman famously smashed the record back in the day. It is also the spiritual heart of the revolution in British cycling.

He did it!  See my pages on this blog.

Back to top
sicycling
Create a free website or blog at WordPress.com.